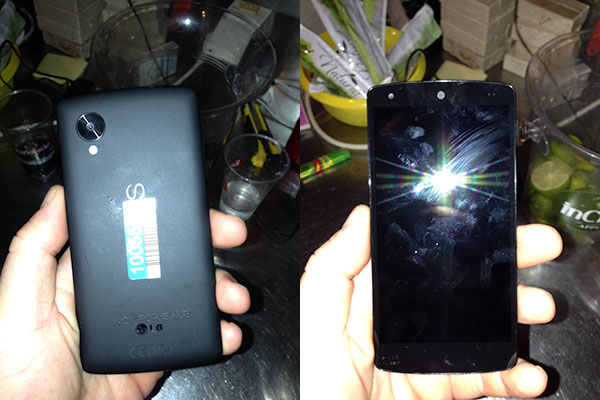 With the supposed LG Nexus 5 lurking in the shadows in the past weeks comes a box full of new revelations that will somewhat put a period on our questions as new photos and a couple of videos were recently spotted.

We know know that the alleged Nexus 5 passed through FCC a couple of weeks back and we’re literally not surprised mainly because it comes with the NEXUS branding (and LG, of course). But, human as we are, we want more out of something that we are not that familiar, especially those treading the line of famous well appreciated devices.

Front and back shots of the LG-D820 were recently spotted around the Web and in all honesty, we’re pretty much satisfied. As per the shots, the back panel of the device will have a smooth feel and should have a curved top and bottom edges.

But then again, an embossed “NOT FOR SALE” welcomed us, so it’s an unfortunate signal that this device won’t come out tomorrow.

According to 9to5Google, the videos and photos came from “a bar employee who took a look at the phone when it was left unattended”. Apparently, that employee was generous enough to take a few shots of the device.