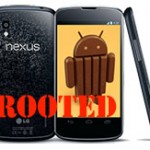 Probably the easiest rooting method is the CF-Root. ChainFire is an elite developer at XDA and with over 9.5million downloads. He even joked that what if those 9.5 million downloads donated him $1 :). Anyhow, I am trying to Root the Android 4.4 but there are few tools used for Mac good thing Nexus 4
Read More
Since the MWC 2011 the Samsung Galaxy Tab 10.1 is one of the most sought after Android Honeycomb tablet.  The guys from DroidLife received a 10.1 at the I/O 2011 so what they did? Root it of course. Rooting the Gala Tab 10. 1 is easy as 123, literally! There are only three steps in
Read More
Morotola Atrix 4G is a great device, packed with power but the out of the box Android has limitations set by the carrier that is why we are looking ways to ROOT it! Rooting is the process of gaining admin rights to the device. Think of this us a computer with guest account, you need
Read More
Rooting Android phone is just a process of gaining superuser access to the operating system. In the normal usage the system only gives you a normal or guest user status thus limiting you to dig down under the system. So what are the advantages of rooting android phone? Having administrative or superuser access to the
Read More